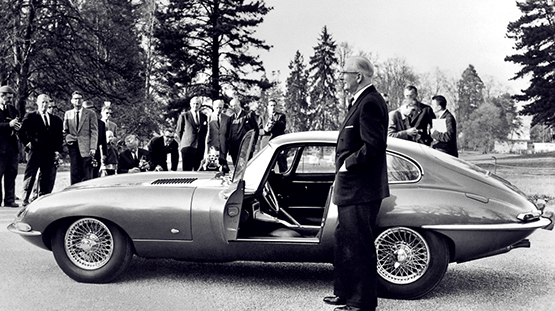 The car was first displayed to the press on 15 March 1961 at the Geneva Auto Show to huge excitement and in a theatrical fashion typical of Sir William Lyons. Thus the E-Type was born.

But the roots of the E-Type go farther back than this legendary press introduction: It’s clear to see the D-Type Le Mans race car influence on the E-Type’s bodylines, while the 3.8-litre straight-six engine was sourced from the XK150 S.

However, it’s the lesser known E1A prototype of 1957 is where the E-Type’s story really begins. The Malcolm Sayer styled E1A was smaller than the final production E-Type and had a 2.4-litre engine, but it showcased the new independent rear suspension design and general layout that went on to be a hallmark of Jaguar models for four decades.

The E-Type was revolutionary in many ways but it was the stylish and iconic bodywork that set it apart from the rest of the cars currently in production. The car also featured faired-in headlights and a centered twin exhaust, which was different from all other production cars at the time.

But it wasn’t just the looks that made it one of the most desirable cars in production. The launch price of the car was around £2,250, comparatively valued at £38,000 in today’s money, which made it surprisingly more affordable than many other sports cars. It also featured much more modern specifications such as independent rear suspension and all-round disk brakes that put it ahead of its time. The 3.8 liter engine gave out a claimed 265bhp and could reach a top speed of 150mph, which made it the fastest production car in the world at that time.

The iconic Jaguar E-Type has a long history and came in three recognized series over its fifteen-year production.

The E-Type was reputedly named the “most beautiful car in the world” by none other than Enzo Ferrari and is often considered to be one of, if not the greatest sport cars of all time. 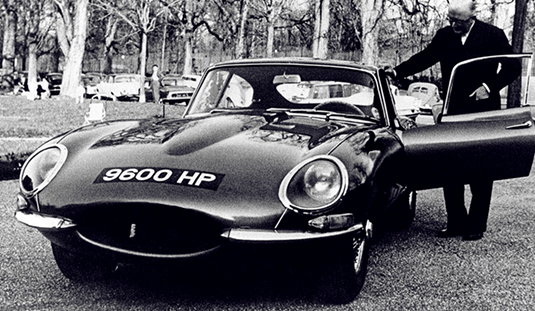 Over this production period of more than 7 years, the Series 1 E-type went through a number of updates and changes, both mechanical and visual. Jaguar continued to develop the E-Type by fitting the larger 4.2-litre XK engine in 1964. Although it still offered 265bhp, the 4.2 came with more torque. Meanwhile, the manual gearbox gained synchromesh on all ratios. The following year, a 2+2 model joined the range for the sporting family driver.

In 1967, Jaguar launched an updated model which later came to be known as the Series 1 ½, only in production from 1967 to 1968. It brought the open headlight design and improved brakes, subsequently featured on the S2.

The Series 2 E-Type was available in a number of different models including the 4.2 Open Two-Seater, Fixed Head Coupe and Two Plus Two. There were a few significant changes from the original E-Type: a larger oval intake for better cooling, larger tail-, stop lights and front turn-signals and of course the open headlights. On the inside, the Series 2 had a revised switch array, where rocker switches replaced the earlier toggle switches.

In total, there were 15,287 cars produced over this period. There were only two models of the series 3 E-Type produced which included an open seater and two plus two. There were some changes from the previous models which included a new V12 engine, a longer wheelbase and wider track, revised grille and four fishtail exhaust tail pipes.